We did a second field trip to Kumbira from October 6th to October 11th. I (Aimy) and Ninda Baptista participated in this field trip together with Antonio Estrelinha (a freelancer photographer). We also were accompanied by Pedro Vaz Pinto (Giant Sable project), Nito Rocha and Wolfram Brock.

During this field trip we participated in a workshop organized by the local Administration of Conda. We had the opportunity to present the project in from of representative of the regional and local government, as well as the civil society (Figure 1). The objective of this workshop was to raise awareness regarding the need to establish a natural reserve in Kumbira.
We also met with Kumbira village school teachers to talk about the environmental education campaign we want to do with the students (Figure 2). The idea of this campaign is to build awareness about the forest importance and its biodiversity. We also had the opportunity to talk with the children and answer to some of the questions they had (Figure 3). During these meetings we had the company of Paula Reis. Paula was born and grew up in Kumbira and her family is owner of Fazenda Belita. She knows the people in the community and her participation in the environmental education activities will be vital to assure their success.


In the nursery, the plants have been growing well. We measured all the plants (Figure 4) and from the 141 saplings we planted in the first field trip, 133 have survived which represent a survival rate of 94%. However, we want to wait to our next field trip to see if this survival rate is maintained. Additionally, we planted 60 more saplings and expanded the nursery (Figure 5).

The first field trip of this year was marked by the beginning of our CLP funded project and took place from August 5th to August 9th. During this field trip we had a meeting with the administrator of Conda (the municipality where Kumbira is located), Mr. Fernando Fonseca, where we presented the project and share some ideas and concerns. Mr. Fonseca show himself very receptive and supportive with the project.

Then we continue our trip to Kumbira, where we met with the “soba” (traditional chief of Kumbira village). In this meeting we also presented the project and asked the soba for his permission to establish an experimental nursery within the community lands (Figure 1). The “soba” kindly indicated a suitable parcel of land that we could occupied for this task and the local people we could work with.
We set up the nursery with the help of two local workers, Arbino and Avelino. With the assiatnce of Michael Mills we collected saplings of native trees in the areas where old-growth forest was still present (Figure 2). Then, these saplings were planted in plastic bags and placed in the nursery that had a shade constructed by Avelino and Arbino using Inga vera branches and oil palm leaves (Figure 3).

This funding will allow us to perform conservation work on Kumbira: building awareness among local population and government, recover degraded areas and assess potential economic alternatives for the local community.

In 2014 two field trips were done to Kumbira.

The first trip was carried out between May31st to June 29th, in which Hugo Pereira and Ana Leite participated, both of whom work at the Centro de Investigação em Biodiversidade e Recursos Genéticos (CIBIO). Hugo is a research assistant and Ana is a MSc student at CIBIO and is doing a thesis project entitled: “Can REED (Reducing Emissions from Deforestation and Forest Degradation) initiatives be used to conserve the unique Angolan Scarp forests?”

The second trip took place between August 2nd and August 31st, and I was joined by Henrique Costa and Ursula Franke. Henrique is a MSc student at the Science Faculty of the University of Porto and also happens to be my husband. Ursula is a German psychologist and bird ringer who had accompanied Michael Mills on other trips.

During these two field trips we did the following work:

Radio-tracking study for Gabela Akalat
A more extensive study was done to assess the home-range size and habitat preferences of Gabela Akalat. For this, mist netting was used to capture the birds, with the help of Michael Mills and Ursula Franke. To increase the species capture probability we used playback. Captured individuals were weighed, measured, tail feathers samples taken for DNA sexing and tagged using transmitters manufactured by Biotrack. Transmitters (PicoPip Ag 379) did not exceed 5% of the bird’s body weight and were attached with eyelash glue to the mantle feathers (Figure 1a & Figure 1b).
Tagged birds were followed during five days with the help of Hugo Pereira (CIBIO, first trip) and Henrique Costa (University of Porto, second trip). Bearings for the birds were registered every hour (from 7:00h to 17:00h, with a recess at 13:00h) using a TR-100 telemetry receiver and a Yagi antenna, giving a total of 50 locations per each individual (Figure 2).

Individuals were captured in four different sectors that were defined according to the forest characteristics as:
1. Invasive forest understorey and canopy is dominated by the invasive Inga vera, original from South America.
2. Natural best old-growth forest in the study area
3. Mixed forest with presence of a non-dominant Inga vera and other species
4. Coffee abandoned shaded-coffee plantations that are being transformed to agricultural plots.

A total of 16 Gabela Akalats were captured and radio-tracked. Only one bird's tag stopped functioning after 1.5 days of radio-tracking. I am not sure what happened with the tag, but as this tag was the one used in the experiments it is possible that there was some problem with the battery.

Repetitions were performed during the afternoon (c. 15:30 – 18:00h) only for the sample points that did not present any endemic. Sample points were separated at least 200m from each other in order to avoid double counting. A total of 83 bird point counts were performed. Gabela Akalat, Pulitzer Longbill and Red-crested Turaco were registered at some of the points. Even though Gabela Bush-shrike was not registered during point counts, Ursula captured one individual near the campsite confirming the presence of this species in the “Alto Minho” area.

Assess biomass capacity of Kumbira Forest
Ana Leite, with the help of Michael Mills, performed the vegetation surveys in selected sampling points. At each point a 10m x 10m plot was assessed for canopy cover using a densitometer and canopy height using a range finder. Tree height and diameter at breast height (DBH) for every tree with DBH> 5cm was measured within the plot. 54 plots were assessed and Ana will use this data to estimate carbon stocks from tree biomass for her master thesis project.

Other interesting things
Ursula spent some time teaching Sergio Fasz, a person from the local village, how to set nets capture and ring birds (Figure 6). Sergido is a person eager to learn and I hope he continues collaborating with us.

Visitors in the camp
Juliette Mills (Luanda International School), Nito Rocha and Rui Marcão joined us for the first days of the trip in June.
Kelse Alexandre, Anabela and Dennis (from the Angola Field Group) visited our campsite in mid-June (Figure 7). Kelse has been a great help with logistics in Luanda.


Presentation in Huambo
I was invited by the Instituto Superior das Ciências da Educação de Huambo (ISCED-Huambo) to give a presentation about the Mount Moco project (Figure 8). A group of teachers of ISCED-Huambo are interested in developing an education project in Mount Moco. We hope this initiative comes through as it will benefit the local population.
Posted by Aimy Caceres at 12:44 PM 6 comments:

The project in Angolan TV

During our fiedlwork we were filmed and interviewed by people from RTP Africa for the program "Escapadelas em Angola" (Getaways in Angola). This is a beautiful program that promotes tourism in the country.
I leave the link to the video (our part is from minute 14:00 to 17:20) 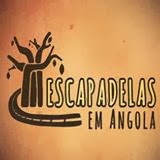 Finally… news about the fieldtrip we did to Kumbira.


Let’s begin with Luanda, where we (Francisco Maiato, Michael Mills and I) gave a presentation to the students of the Science Faculty of the Agostinho Neto University (UAN) (Figure 1). This presentation was a great opportunity to promote the conservation projects we are developing in Angola and to encourage students to participate in these projects.
Then…all the way to Kumbira!!
Bird point counts were done with the help of Michael Mills (who has been training me in bird species identification). Point counts were done during 10 minutes in the early morning (6:15h-10:00h) in forest stands that were old growth and secondary growth. Vegetation variables were also measured in these points.
A total of 54 bird (see list at the end) species were registered in 50 sampling points. Statistical analyses are being performed to establish differences in bird community.

A radio-tracking pilot study was performed with two individuals of Gabela Akalat and Gabela Bush-shrike. The objective was to evaluate if radio-tracking could be used to study habitat use and home range of endemic species. Birds were captured using mist-netting. A decoy and playback were used to increase capture probability of Gabela Bush-shrike (Figure 2). Captured birds were tagged using transmitters manufactured by Biotrack (Figure 3 and 4). Tagged birds were followed during 10 days and bearings were registered every 2 hours (from 7:00h to 17:00h) using a TR-100 telemetry receiver and a Yagi antenna (Figure 5). Data is being analysed using the software Locate, Quantum GIS and R.
Conservation Issues
Farming for Luanda. More areas are being cleared for agriculture (Figure 6). People are not only farming for subsistence but also to sell products in Luanda. In different occasions we saw trucks taking bananas, tomatoes, pineapples and pumpkins to be sold in Luanda. Some people mentioned that is more profitable to send their products to Luanda than to nearer cities like Sumbe.
Selective Logging. Selective logging is taking place in Kumbira. A piece of wood can cost 8-17 USD depending on the wood quality. Each tree can give up to 30 pieces of wood, meaning that a tree in Kumbira is being cut for 240-510 USD (Figure 7). Loggers have chainsaws and wood is usually taken out from Kumbira by trucks on Sundays (probably less control by authorities). The Administrator of Conda mentioned this problem and that they have already fined different persons and confiscated logging equipment.


Visitors in the camp
During our stay in Kumbira we received visitors in the camp:
Juliette Mills (from Luanda International School) and Rui Marcão (Portuguese birder) spend a couple of days with us at the beginning of the trip.
Mrad and Inge Shaia and their friends visited us at the end of June. They were South African tourists travelling around Angola.
Kelse Alexandre, Henrietta and Takko Konning from the Angolan Field Group visited the camp at the beginning of July.
Bruce Bennett, a Zimbabwean living for 20 years in Angola, spent a couple of days with us just before we left the field.


It was great to have all these people around and to see that different persons are interested in Kumbira.

Posted by Aimy Caceres at 5:13 PM No comments:

Aimy Caceres
Peruvian biologist making a PhD in the University of Porto with a project in Angola... conservation has no borders!!